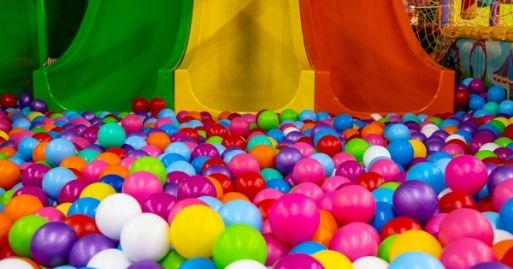 We’ve all been there—asking our parents to go to McDonald’s just to jump in the heavenly yet “dirty-and-probably-never-cleaned-but-we-didn’t-care” plastic ball pit. Or perhaps you remember going to the mall with your family and begging them to let you play in your favorite play area. Have you ever wanted to learn a brief history of commercial plastic ball pits? Well, we’ve got you covered!

The Man Who Started It (B)all

Eric McMillian. One of the world’s most renowned playground creators and innovators of our time.

It is believed that many of the world’s creators almost always had one goal in mind: to give others what they themselves didn’t have. Though McMillian did indeed change the world and improved the childhoods of millions of children across the globe, he didn’t have a perfect childhood himself.

Bouncing between rooming homes and education systems, McMillian grew up in North England with impoverished parents—parents who let him outside in the morning to do whatever he pleased. His daily play typically included playing with bricks inside abandoned buildings.

When he quit school at 15, he began working as a painting apprentice. The trade school was attached to an art school that inspired him to start a new life for himself.

“I became an apprentice house painter, and then moved up to art school and then I became a genius and moved to North America.”

Fast forward to the 1970s; he was allowed to help create the waterfront attraction, Ontario Place in the quiet providence, Toronto, by fixing the developers’ mistakes. He then was given a $700,000 budget to create a playground for Children’s Village at Ontario Place, where the plastic ball pit was born.

“Suddenly I became the world’s expert on child’s play.”

His creations of the “free play” park with punching bags, spider webs, and zip lines were simply a “safer” expansion of his childhood. McMillian realized that playgrounds should be built to help children grow and boost their learning.

After Children’s Village, McMillian was pulled in every direction to design parks for SeaWorld, American theme parks, and even Sesame Place in the 1980s.

Where Do Ball Pits Stand After Covid?

While the indoor playground with balls is still a child’s favorite playground attraction, will we ever return to them after the pandemic?

At this time, it’s still unknown, but with the creation of the ball-pit washing machine (precisely what you’re imagining), there is still hope that we can once again dive into the colorful sea of plastic balls.

Now that you know the history of commercial plastic ball pits, don’t be afraid to create and innovate.

Isn’t that what child’s play is all about?