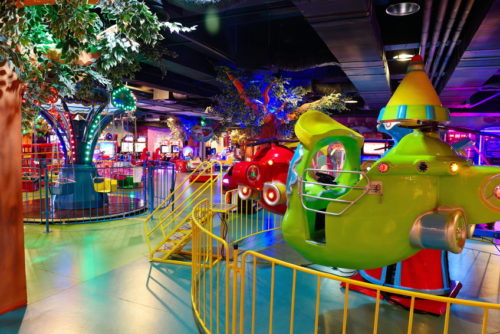 It’s no surprise that children have a seemingly bottomless well of energy to draw from. While it can be exhausting at times, it’s part of their growth and health! The American Heart Association says that kids over age two should engage in a minimum of one hour of reasonably physically strenuous activity per day. Indoor playgrounds are a staple of early childhood exercise and social development.

We think commercial indoor playground ideas set the tone for building a healthy atmosphere that parents can bring their kids to for entertainment, activity, and they’ll give their parents a little break (we’re looking out for them, too). Your indoor play space is your canvas and children are incredibly imaginative young beings. Creating them a space that revolves around physical exercise, visible sensory exploration, and imaginative development will make it that much more entrancing. We’ve got some thematic ideas that’ll make your indoor playground a portal to another realm.

These ideas may seem like a stretch, but they’re not. Commercial indoor playground ideas aren’t tough to cook up, they just take a little creativity and hopping out of adult-mind and into child-mind! Remember the equipment itself is fun on its own, but the addition of artistic theme breathes life into an inanimate structure that only a child’s imagination can create. When you’re brainstorming, think back to when you were a kid and channel that creativity. Who knows, you might have more fun than you think.